Info
Sweetaj Brar is a Punjabi Singer and Actress associated with Punjabi Music Industry. She was born in a Sikh family on 25 September 1998 and her birthplace is Mohali, Punjab, India. Her height is about 5′ 9”. She did her schooling in Yadavindra Public School, Mohali, and did her graduation in Business Management at Chandigarh Group of Colleges, Landran. Later, she moved to Canada for further studies in Psychology from York University, Toronto. Sweetaj Brar’s father’s name is Late Raj Brar (famous Punjabi Singer) and her mother’s name is Balwinder Kaur and her brother’s name is Joshnoor Singh Brar.

Besides, she is an amazing actress, she has to start her film career with Kulwinder Billa‘s film Gole di Vegi which is to be released in 2021. Also, some another upcoming movie named Fikar Karo Na.
Apart from singing and acting, Sweetaj Brar participated in Miss India in which she reached the top 3. She was the first runner up in Mrs Punjab in 2019. She also won FBB Femina Rajnigandha Pearls Miss Goodness Ambassador 2019.
Born/Family
Sweetaj brar was born on 25 September 1998 at Mohali, Punjab, India, In the sr. Rajwinder singh aka Raj Brar‘s house. Her father late Raj Brar was a great Punjabi singer and her mother Balwinder Kaur (Bindu) a housewife, also a model. She belongs to a sikh family.
Now her mother open a boutique (Elegancia)
Although he was born and raised in Mohali, her village is Malke, Moga, Punjab. Her brother Joshnoor singh doing study at Chandigarh.
Her Uncle Sr. Balraj singh brar living with a grandfather named Pashora Singh and Grandmother Thiyaan Kaur.
Sweetaj studied up to 12th with commerce subjects from Yadwindra Public School, Mohali. After that, she completed her business management from Chandigarh College Group of Landran. in 2018.
She moved to Canada for higher study in Psychology. She took admission to York University in Toronto, Canada. But her mother would be sick there so her mother and brother had to come back, and Sweetaj did not feel good there and she came back to India. Returning here, She completed her hospitality management course from CGC, landran.
Career
Sweetaj said that she love to singing, dance and modelling since childhood. She wants to be miss India, also she participates in it, and reached in the top 3. She was the first runner up in Mrs Punjab in 2019. She also won FBB Femina Rajnigandha Pearls Miss Goodness Ambassador 2019.
She also wants to make a career in singing so, she contacts True Maker (a music production company), Company like Sweetaj vocals and released a debut song Love You Oye with Prabh Gill.
She then released her solo song Raah pushda which was much loved by the public on 30 October 2019. On 22 October 2020, but she breakthrough with Care Ni Karda, feat. Yo-Yo Honey Singh, this song released in Bollywood, Labed T-Series, crossed millions in 24 hours.
More About Sweetaj Brar
• In 2019, she debut her first song with Prabh Gill’s song ”Love You Oye” and the song received more than 100 million views.
• She has also won the title of FBB Femina Rajnigandha Pearls ”Miss Goodness Ambassador 2019”.
• Sweetaj Brar has also sung a song ”Care Ni Karda” featuring Yo Yo Honey Singh in Bollywood Movie ‘Chhalaang’.
• Sweetaj has begun her film career ”Gole Di Vegi” with co-star Kulwinder Billa and another movie ”Mossa Jatt” which are set to be released in 2021.
• She is coming out with her new song ”Khabbi Seat” featuring Ammy Virk.
• Sweetaj Brar coming soon in the new Punjabi Movie ”Fikar Karo Na”. 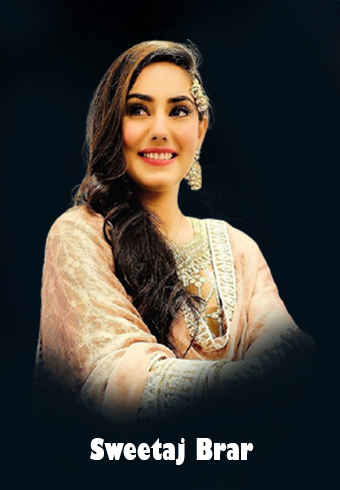