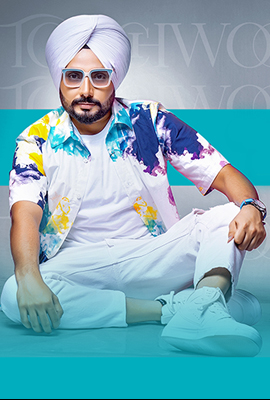 
He has worked with various artists like Karamjeet Anmol, Kamal Khan, Jimmy Kotakpura and karma topper.

It was his mom’s wish to become a singer, her mom gifted her with a harmonium 7 days before she died when Harjinder was very small. Both his father and grandmother had a great role to play in building a career for their only offspring Harjinder.

Travel and tours
Has travelled to countries like Canada, Singapore, Malaysia for his various performances.
There have been various places in India too like Uttarakhand and Mumbai

Harjinderer Randhawa
When a young Harjinder from Punjab spoke about wanting to become a famous singer in his school days his peers would snigger at his high hopes and think he was living in a fantasy land. But now the very same boy has struck gold and turned his fantasy into reality by getting launched as a lead singer from Touchwood Productions and playing the lead composer’s role in an international Punjabi film release “Fikar Karo Na”. Harjinder is all set to star in a Punjabi Film being released here in the UK, all over India, Canada, Europe and many other countries across the globe.

Born in the district of Patiala , Punjab, Harjinder has had a ladder-fetching childhood. His parents realized that Harjinder had a musical gift from the time when he was very small. He spent hours playing on a harmonium, and once built his own drum set using his mother’s pots and pans.

Harjinder during his childhood days, enjoyed nothing more than putting on musical shows for his family to enjoy. The Randhawa family has a library of videos of their son’s memorable performances.

At the age of three, Harjinder sat before a harmonium for the very first time. His parents’ belief in his talent manifested itself when it became apparent that he could play by ear. He seemed to absorb the music and play it effortlessly.

As the years passed, Harjinder would learn to play several instruments, including the harmonium, tabla, arbaab, dhad, tumbi, piano and dholak. As soon as he had mastered one, he would be looking for his next challenge.

When Harjinder decided to begin touring, his instrumental skills, soulful voice and haunting lyrics immediately gathered a loyal fan base around him. His style of music is not just limited to Punjabi music but is also influenced by Indian Classical, Folk, Sufi, Gurbaani keertan and Ghazal. The melodic mix creates a distinctive sound that intrigues and transports his listeners. He seems larger than life on stage with his music penetrating into hearts and souls.

Fond of teaching the budding minds of young students, he has devoted enough time to travel around various parts of the world in the conquest of his endeavour.

He left the religious path to follow the commercial music because he believed that Commercial music is a platform where he would be provided with the worth he has been gifted with.

In his latest film Fikar karo na, he has composed the music of a song named “ Mangta”. The song has been sung by Kamal Khan.